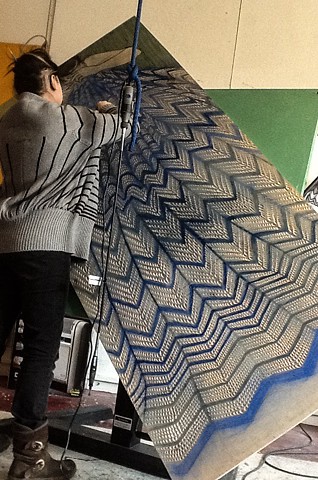 Lisa Pixley is an artist printmaker located in Portland Maine. She received her BFA with a concentration in painting from the Maine College of Art. After graduating Pixley began a commercial and artistic practice focusing on the craft of print. She studied as an apprentice with Masterprinter David Wolfe of Wolfe Editions where she worked closely with artists such as Charlie Hewitt and Allison Hildreth. In 2009 Pixley founded Pickwick Independent Press in Portland Maine, a for-profit shared-access print studio where she worked as director, master printer, and events coordinator, while also maintaining an active art practice in the medium of printmaking. Pixley is currently developing a new venture: WIP Editions. WIP Editions will function as a storefront studio entity as well as an online presence. Under the emprint of WIP Editions Pixley will be developing a body of work showcasing suites of prints of her work as well as the work of invited artists.